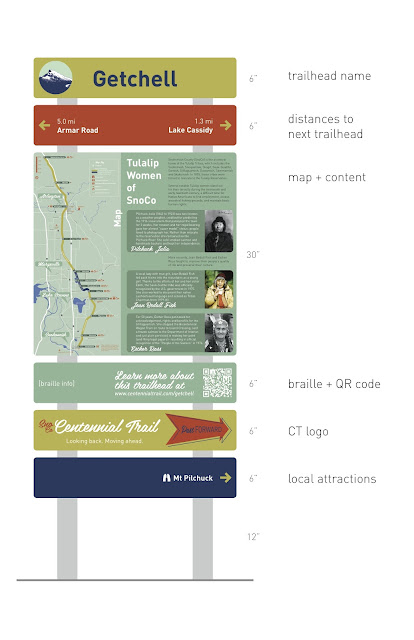 This drawing is a draft for a set of signs that are being developed for 7 trailheads on the Centennial Trail.  This Past Forward project is funded by Snohomish County's Economic Development program.

Director Teigen emphasized that both the County Council and the Executive branch have strong support for the County Parks and for developing more long distance trails.  Snohomish County has invested $90 million in the Park system in the past 6 years.

There is a proposed draft to upgrade the restrooms at Haller Park in Arlington, one of the Centennial Trail parking and access points.  This capital investment will be a partnership with the city of Arlington.

Snohomish County is committed to the  big picture goal of combining Rail and Trails on the Eastside Trail Corridor.  This connectivity is a major aim of all the counties, and would put this trail system into the top 5 in the US, opening up the very real possibility of Federal funding programs.  This would allow leveraging local dollars into federal dollars.  It is feasible that a trail corridor will be developed connecting Pierce, King, and Snohomish Counties, all the way to Skagit County.

While the capital development funding sources are being pursued, the County Parks maintenance budget is tight, but several maintenance projects are in planning for the Whitehorse Trail.  Railings are being designed for the first bridge east of Arlington on the Whitehorse Trail.  The county parks maintenance will be experimenting with short sections of surface treatment to work towards improving the currently very loose gravel that exists just east of the Centennial Trail.

Parks Director Tom Teigen stressed that community action and involvement though liaisons such as have been developed by the Centennial Trail Coalition of Snohomish County are the best way to advocate for the future of long distance recreation trails in the county.
Posted by George Winters at 4:06 PM