News and Reports for Snohomish County (and beyond) Long Distance Trails, Biking, Hiking, and Equestrian

There have been several very interesting bits of news lately.  People regularly ask a few of the same questions.  This post will try to sum up the developments.

Snohomish County Public Works is making great progress on the Whitehorse Trail bridge decking project.  Bridge 709 on the County's list is now decked and ready for when the trail gets opened.  That is the eighth bridge completed in less than a year.  Wow!

There are only 4 bridges left on the trail that have no decking: one over Montague Creek near Whitman Road, across Boulder River, over French Creek, and at Fortson Pond.

The County is still planning to finish decking and installing railing on all the bridges this year.  Two of the bridges are also needing some work in the stream channel.  The time during which that type of work can be done, the "fish window", has passed for this year.  Russ Bosanko, operations manager for Snohomish County Parks reports that Public Works plans to work on the superstructure this year and then next year they can do the work in the stream channel.

The county is currently working on a design to present to WSDOT for the highway crossing east of Cicero on the Whitehorse Trail.  County Public Works or WSDOT has property that might allow a slight  trail routing in that area to make the crossing more visible with a better line of sight that will allow a second at grade trail crossing across SR 530.  This will be a key factor in continuing plans to open the trail.  Snohomish County Parks wants to open the entire trail in one go rather than in sections, and the two crossings of SR 530 are integral to that plan.  The original railroad opened to Darrington in 1901.  Within about a year we hope to see a new grand opening.

The Whitehorse Trail will re-open in the Oso slide area and there is funding for that.  The County has also purchased 13 acres with conservation futures dollars in the Oso slide area for a possible memorial that the families will determine what is appropriate.  Any land bought with FEMA funds can not be used for development in the future, not park or even trails.

Russ Bosanko of Snohomish County Parks also says that the survey work for connecting the Centennial Trail to Monroe has been done now, and that the County will have $500,000 per year for developing this project starting in 2018 through 2021.

There will soon be one more bird on the Centennial Trail bridge over the Stillaguamish River north of Haller Park.  Then Centennial Trail Coalition along with the Arlington Arts Council, has contributed  a bit more money on top of the help with the purchase, so that a mounting can be made.  Snohomish County Public Works Bridge Crew will soon install the new art work by Dan Brown. 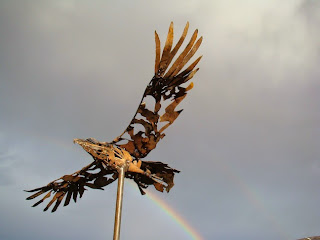